If sunrise here was before 8 a.m. I would’ve been out and back with brekkie supplies for my family before then. At 4 a.m. I  woke to a mysterious stench of stale urine in our room which I am unsure why but the AC sorted that out once we switched it back on.  As I was awake, I spent a couple of hours planning today’s route on Google maps to take me around but not up some more caldera on what turned out to be some pretty well signposted trails. This was followed by a snooze on the sofa interupted by a mozzie whining around me. Turns out it had a go on my right index finger. I was only wearing my undies so it missed out on a proper party binge…

The tyres crunched up and down the biscuit base tracks consisting of stones with a gravel texture on the old lava flows of this volcanic island. They have really advertised the trails well here and it is easy to plan a route without having to join a tour provided by the many cycle hire places in town. The start to each track has some interesting info about where each track goes and the points of interest on the way.

I was passed by such a group on quad bikes and ate their dust as they sped past. The smart money on their nationality is that they were from somewhere other than Britain as they did pass considerately which has been a pleasant feature of my 2 rides so far…

Riding on volcanic terrain is awesome. They coluldnt be more different from the sloppy trudge through boggy brideways of Essex and Hertforshire. There is a barren, desolate beauty about them, one which makes you feel that it’s just you and the gravel. On Sunday, I saw no-one on the trails and I felt like I was the only person on the planet, let alone the island. Today was a little different. There were others but I was too slow to catch them up. Jim, you would be in gravel bike heaven here! 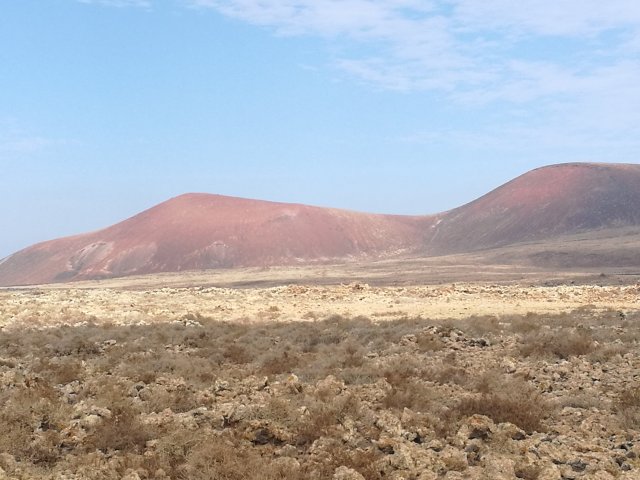 After 13km of crunching up and down, I reached Lajares and took a main road up to Majachinto before hitting more off-road back to Corralejo. This was pretty bumpy and rutted for the 1st half due to the high volume of car traffic getting to and from the beaches and slowed me down. This is salt marsh territory so the consistency of the road will never be great. But the views to my left of rolling surf with neighbouring Lanzarotte in the background were a welcome respite even though the cross/headwinds gave rise to the odd curse or three.

Rolling surf with Lanzarotte in the distance

Before I got to my forth type of effing curse, the desalination plant powered by wind turbines followed by the buildings of Corralejo came into view. So I knew that  another 5km I was back in tourist town resplendent in cycle lanes, courteous drivers at road crossings and a cafe was only a matter of time.

A dip at the beach involving a lot of horsing around with the boys followed by a BBQ at the villa was a great way to end a the day. Every day is better than the last here-as long as it involves a ride around some volcanos early doors…

Sometimes bad tempered Dad to 2 sons who break things. Use the 2 wheels to get from A to B when I can
View all posts by biking2work →
This entry was posted in cycling, holiday, Uncategorized. Bookmark the permalink.