This time of year sees goals met and records being broken. My 100th bike commute for the year was completed in record time at the beginning of December. It’s the 3rd time in 4 years that I rode my bike to & from work 100 times. Although most commutes have been from home and back, I have fitted the others in around the school run.

I normally like riding in the fog. Around the country lanes, it is easy to forget where I am. In a nice way as I go roughly where the wheels take me. But this morning was a cold one even though I was eventually treated to a magnificent sunrise when I got to higher ground.

I was treated to another close pass, this time by an @®$€hat driving a Vauxhall Dumbo. That’s a white van reg#WM15 ZZE. He was closer than the bus the previous day and I reacted with my usual profanities under my merino scarf. 2km later I passed him sitting in stationary traffic. I gave him a full repertoire as I passed. His window was open. I stuck to the pavement and cycle tracks thereafter-he didn’t look like the sort of person to take feedback calmly.

I got to work to the sight at the bike shed that evoked memories of my past. 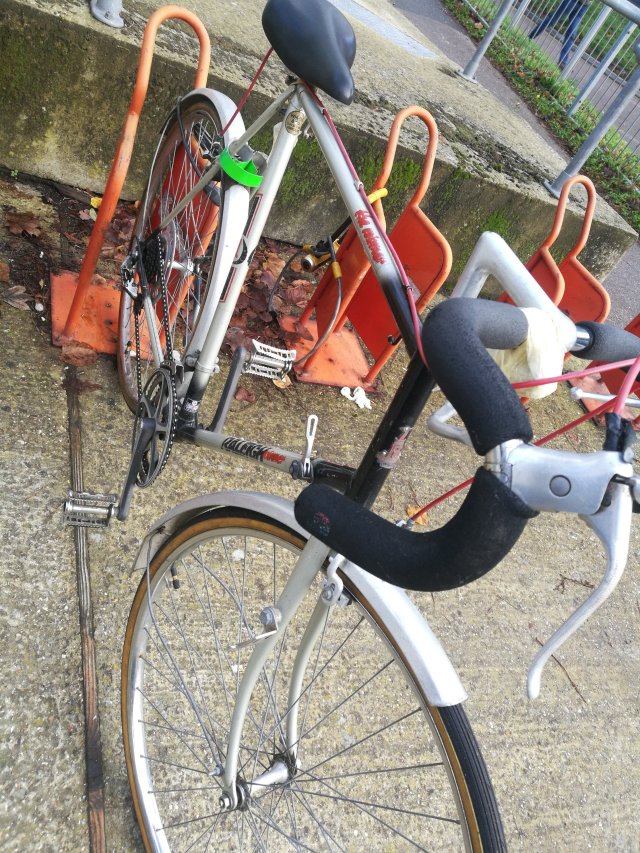 Down tube gear levers, horizontal bar brake handles and 10 speeds. A gift from the 80s

Work done. I sloped of early taking time owing. I stopped at the local(ish) Thai restaurant to collect prawn Pad Thai and fish cakes to celebrate Mrs B2W’s birthday with a bottle of Sauvignon blanc.

Sometimes bad tempered Dad to 2 sons who break things. Use the 2 wheels to get from A to B when I can
View all posts by biking2work →
This entry was posted in commuting, cycling and tagged bike commute. Bookmark the permalink.